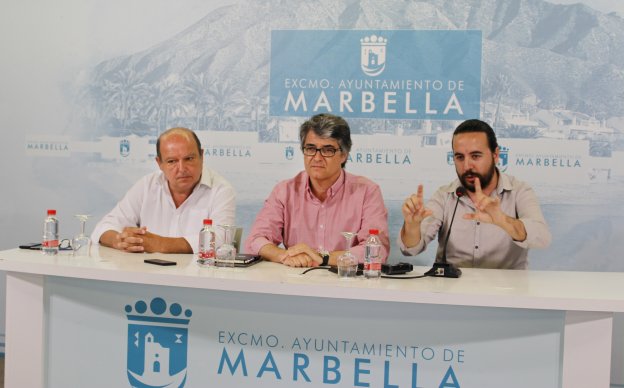 The actor Carlos Bardem will receive the International Projection Award at the event, and the Goya Theatre has been chosen as the meeting point for the Spanish and international film industry for the first edition of the Marbella Film Festival

Series like ‘La Embajada’ that was shown on Antena 3 last year and films like ‘Princesas’, wouldn’t be the same without the masterful performance of one of the most discreet members of the Bardem clan, Carlos Bardem (Madrid, 1963). The actor will pick up the International Projection Award at the first edition of the Marbella Film Festival this coming weekend. The award ceremony is set to be one of the highlights of the festival that is new to the festival circuit promoted by the Malaga director Ezekiel Montes, and there will also be conferences with leading figures from the world of cinema like Kike Mesa. The festival, which starts this Friday and finishes on Sunday, is presented as a meeting point for the Spanish and international industry and was set up to become an annual event as part of the calendar of summer events.

The Goya Theatre Cinema in Puerto Banús is the centre of operations for the festival and will show six films and eleven shorts. Visitors will have the opportunity to watch all the screenings at a reduced price of €2.90, which is the same price as tickets for the days of the film festival. Passes can be bought directly from the box office or from the cinema’s website.

Six of the productions coming from the United States, Poland, France and Spain will be screened in the official section. And from these six, five will be chosen for the awards from the jury and the critics, all of which are debut films: ‘Anomalous’ (Spain), by Hugo Stuven; ‘Ekaj’ (USA), by Cati González; ‘Maniac Tales’ (Spain), by Kike Mesa and Rodrigo Sancho; ‘Money’ (USA/Spain), by Martín Rosete, and ‘Rage’ (Poland), by Michał Węgrzyn.

The event, which bursts on to the calendar of summer events is promoted by a director and producer from Malaga. The six films and eleven short films screened over the weekend can all be seen for the reduced price of €2.90.

The jury composed of the director of the Costa del Sol Fantasy Film Festival, Julio Peces; actor Paul Lapidus and a group of students from the Malaga Film School will present the awards for the Best Film, Best Director, Best Actress, Best Actor and Best Screenplay. The films nominated in the official section will also have the chance to win the Special Critics Golden Blogos Award, which is awarded by a jury of online film press experts. Productions from Hong Kong, Austria, Turkey, Morocco, Iraq, United Kingdom, France and Spain will all compete for the Best Short Film Award.

Following in the footsteps of other major festivals, Marbella will also hold other activities in parallel to the screening, including the presentation of the award to Carlos Bardem on Saturday, June 17th. Four of the directors competing in the official section, Philippe Martínez, Cati González, Kike Mesa and Hugo Stuven will all take part in a debate with the audience once the screening finishes.