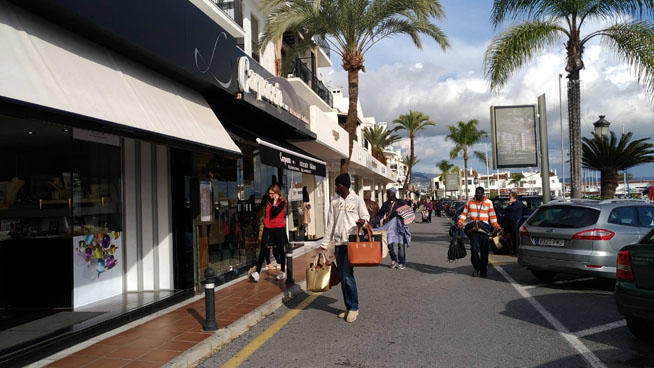 Business owners see the installation of a video surveillance system as something positive to deter crime, especially in areas attracting a lot of tourists like Puerto Banús, Ricardo Soriano and the Promenade

Business people and retailers in the municipality are 100% in favour of installing video surveillance cameras in certain parts of the city, especially in areas that attract a greater number of tourists like Puerto Banús, the promenade and Avenida Roicardo Soriano in Marbella.

This is the opinion of Juan José González, President of the Centre for Tourism Initiatives of Marbella (CIT), who welcomed the City Council’s and the Subdelegation of the Government in Malaga’s commitment to install video surveillance systems in certain points around the city during last week’s plenary.

“At the CIT we’re eager and excited and we hope it will go ahead” said Gonzalez, who recalled the fact that the business community had previously supported installing video cameras in Puerto Banús some years ago, but unfortunately it never saw the light of day.

Furthermore, the business community would also like to install security systems in golf courses and residential areas so “everyone in the area can have some peace of mind”.

Puerto Banús is one of the places in Spain with the greatest concentration of wealth, which is one of the main reasons why the public administrations recognise the value of installing video surveillance cameras. The president of the Association of Business Owners and Professionals in Puerto Banús, Giuseppe Russo, stressed that installing the video cameras in and around the marina “isn’t just necessary, it’s essential” and this is something the group has been demanding for almost 10 years.” he said.

He also said he expects the project to be “taken seriously” and not just something that’s announced to the press, but that “it will actually be installed” as 70% of visitors in the city during the summer months are concentrated in Puerto Banús.

He hoped the video surveillance cameras would be “correctly installed” for the summer season next year as this is the time of year when Puerto Banús suffers the biggest security problems due to the large influx of tourists that come to the area.

“We have a type of tourism that is precisely not the model we want. These are visitors who come to the marina to get high, and look for entertainment that is not exactly catalogued as a profession” he said in reference to prostitution and drugs, which are the most frequent problems in the area.

Russo thereby valued the installation of video cameras as a positive deterrent towards preventing crime and vandalism, he also pointed out the need to act against the illegal street vending by allocating more permanent resources to the area.

The business owners consulted in and around the marina also believe there’s a need to apply these systems in the area, mainly in summertime, even though Puerto Banús is managed privately and has its own security service.

“Romanian gangs steal on commission and come here every year. It’s impossible to control them,” said Amanda Gálvez of Sunglass Hut. “The street vendors affect our business and it’s a mafia that deals in trafficking humans,” she added.

“Video surveillance is always useful as it acts as a hindrance to those planning on committing a crime,” said Kiko Moreno, the first C.O.B of the concessionaire Puerto Banús S.A.