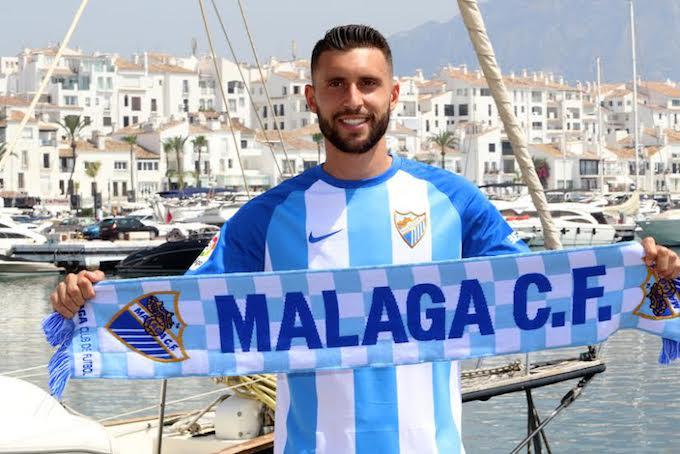 Malaga Football Club introduced the latest addition to the team, striker Borja Bastón, to its fans today in Puerto Banús. The Malaga squad is currently on the Costa del Sol and took advantage of their time in the area to visit Puerto Banús and for its new signing to see firsthand the benefits of the climate in Marbella.

In a special event that took place this morning in Puerto Banús, Malaga Football Club presented Borja Bastón in the Club de Mar located close to the Marbella marina, a striker who is set to play a pivotal role for the club this season.

Borja Bastón arrived in Malaga from the UK after a difficult season at Swansea FC. Now that he’s back on the Costa del Sol he hopes to return to form and score many goals just as he did during his time at Éibar.

In his first press conference as a Málaga footballer, he acknowledged the fact that “Malaga’s idea to bring me here has been an excellent decision. The club’s project, with a lot of young players and some top quality veterans, is extremely attractive for any player, and also the insistence of Francesc and the coach.”

Bastón believes he can return to form and start scoring goals again at La Rosaleda, “you learn from everything, and you can draw good conclusions. I’m here now and hope to make a big impact, and that’s it’s a good year for the club and for me. I hope we have a great season, and I’ll do my best for the team and the fans to make sure we arrive as far up the table as possible.”

“Malaga’s offer was what enticed me most, I want to be at a club where the fans want me, and I felt this affection here,” he said, while adding, “I’m delighted to be here, now the most important is to start the league. I really hope things go well and that it’s a great year for us.”

He also spoke about Malaga’s exciting project “the aim is to rise up in the classifications with a lot of ambition and young players, the coach has told me he’s going to be very demanding. In the end, if you want to be up there with the best you have to be persistent if you want to do well”.

After speaking to the press at the Club de Mar, Bastón posed for the official photo in the mooring area of the marina sporting the new Malaga kit and also took some time out for photos with the Malaga fans who attended the presentation.